Pennsylvanian seller Karen of Lavender Clothes Line has created an entire life that centers around entrepreneurship and connections.

Editor’s note: In celebration of eBay’s 25th anniversary, we’re spotlighting a seller every week from our global community in our Mini Stories column.

Creativity. Connections. Flexibility. Freedom. All keywords for Karen, owner of store Lavender Clothes Line, for whom eBay has provided her not just with an income — it’s become her way of life. “I’ve bought my house with some of my earnings, I usually travel when I want, I’ve met amazing people, even when I go on vacation, I’m thrifting,” she said. “I pretty much think about eBay 24/7. If I worked a regular job, my whole life would be different.”

Karen opened her eBay shop in 2013. At that time, she was managing a fitness studio on Long Island in New York. But with three adult children living elsewhere, and a large family home now standing virtually empty, she was searching for other options. “I wanted to downsize and move to another state,” she said. Inspired by one of her daughters, herself an eBay seller since 1999 and who would talk about the marketplace when at home from college, Karen decided to give eBay a try. “I became very inquisitive and very excited, and had a million questions. It was really Mellissa [my daughter] who prompted my curiosity and my excitement for eBay.”

“I started out selling women’s clothing, but quickly realized I could buy anything to sell,” she said. Karen visits thrift stores, yard sales, flea markets — anywhere and everywhere that secondhand quality treasures might be found. “But buying is not the same as selling,” she cautions. “Everybody loves thrifting, but they have these piles lying around. If you don’t list it, you’re not in business, you’re collecting.”

Her eye for hidden jewels speaks to the fact that the common thread for everything in her store is quality, Karen said. “It’s the number one thing I look for when I’m thrifting: I look for how something is made. Like for a pair of shoes, I’ll ask myself if it’s a leather sole, what the stitching is like, if it’s good workmanship.” She’s developed her eye for fine goods over the years, teaching herself about different types of wood, fabrics and other materials. “I’ve read books, I’m always learning, always honing my skill,” she said. “It also just comes with time.”

With a strategy that’s one of sustained success rather than a series of fast flips, Karen has created a business model that works toward that goal. “I wanted to be a long-tail seller,” she said. “When you have thousands of items, you’re not going to sell them all in one or two months. So I’ve always looked to build my inventory, and it doesn’t bother me how long it takes to sell something, because I’m a big believer that there’s a buyer out there for every item. In the end, my whole store’s inventory usually turns over in about 15 months.”

From $95 bars of luxury soap to a sword she picked up at a garage sale for $15 that turned out to be from the Civil War that she sold for $350, Karen delights in the wide breadth of her offerings for both new-in-season goods and beloved items.

One of her proudest sales is a painting she stumbled upon in Goodwill one day, flipping through a pile of artwork. Unframed, acrylic on canvas of a moody creek, “the minute I saw it, something about it really looked like the artist was talented,” Karen said. She bought it for $2.50. Further research showed that the signature was that of Ira J. Dean, a now-deceased Pennsylvanian artist, and she sold it on her eBay store for $588. “Long story short, the buyer sent me the most lovely note that she was his granddaughter and was collecting his paintings to leave to her own children,” she said. “I love that the painting found its way home — and I made a great profit!”

Even though she’s now a tenured member of the marketplace, Karen gets up every morning before dawn, as she has always done, eager and ready to sell. “I still love the excitement of selling on eBay,” she said, mentioning that there is no “typical” day as being “one of the greatest perks of the job.” Whether she’s photographing or listing items, sourcing goods or shipping sales, “there are so many different aspects, it doesn’t get boring.”

Over the past few years, Karen has also developed strong connections around the eBay community, sharing her knowledge of the platform while also finding friends and learning from other sellers.

Social media proved one channel for connections, starting with Instagram, where Karen posted some of her most memorable sales to encourage other eBay sellers and has since garnered over 28,000 followers. Mellissa, her daughter, coaxed her into starting her own YouTube channel to springboard off her Instagram success. “I’m the least technical person, so for my first video, I filmed myself on my phone vertically instead of horizontally, and there were big black bars on either side,” she said with a laugh. “But I just took it in stride.”

That first video was a tour of her home in Pennsylvania, a 1950s time capsule with daisy wallpaper and red countertops that she bought with earnings from her store because it had great storage capabilities and good lighting for her listing photos. “I wanted to grow my store, so I literally asked the real estate agent for a place that would house my eBay inventory,” she said. “She thought that was a little odd.” That first video gained her thousands of YouTube followers; she now has approximately 29,000 followers who listen to her share how she’s found success on the platform. “The videos also help my eBay sales by bringing more buyers to my store,” she said. 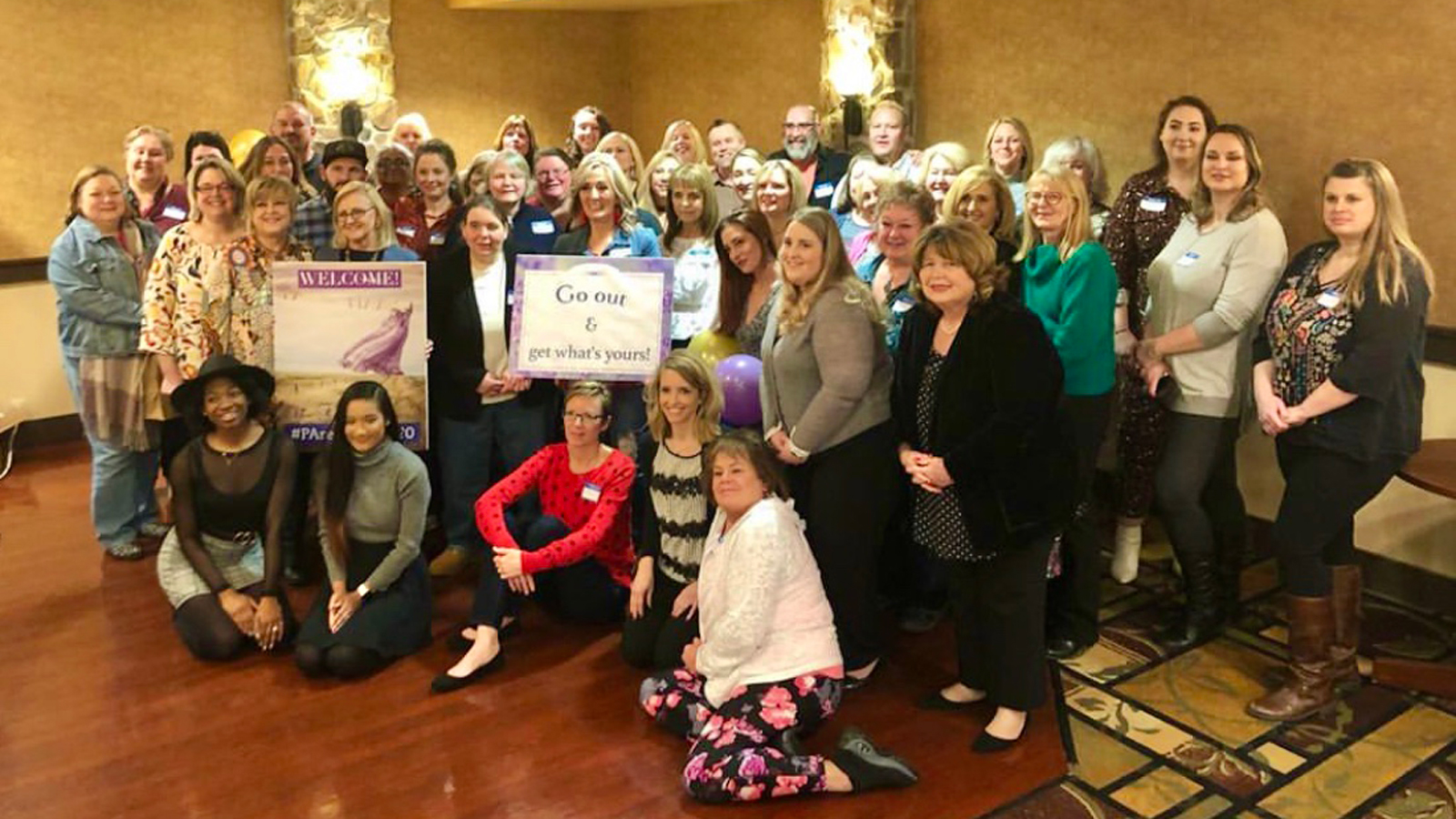 Some of the entrepreneurs Karen gathered for her second eBay dinner in early 2020 in Pennsylvania. After almost 100 people expressed interest, she rented a hotel space for the event.

As a highly social extrovert, Karen also simply enjoys trading tips and ideas with other sellers. She attends eBay conferences, introducing herself to young sneakerheads and random strangers “to share knowledge and learn as much as I can,” she said. Two years ago, she invited 18 fellow thrifters in her part of Pennsylvania to lunch and “our only connection was that we met at thrift stores,” she said. They sat and talked for hours; the lunch was such a hit, Karen organized another lunch early this year to which over 100 people expressed interest in attending, and she hosted a buffet, complete with swag bags finished with eBay tape.

Even with all her store activity and social media, Karen is still a one-woman operation — with a little occasional help from family. “They’re really supportive; my older sister comes from Long Island a few times a year, she’ll stay and we’ll pack inventory for days,” Karen said. “And my middle daughter edits all my YouTube videos and also helps take photos of inventory.” 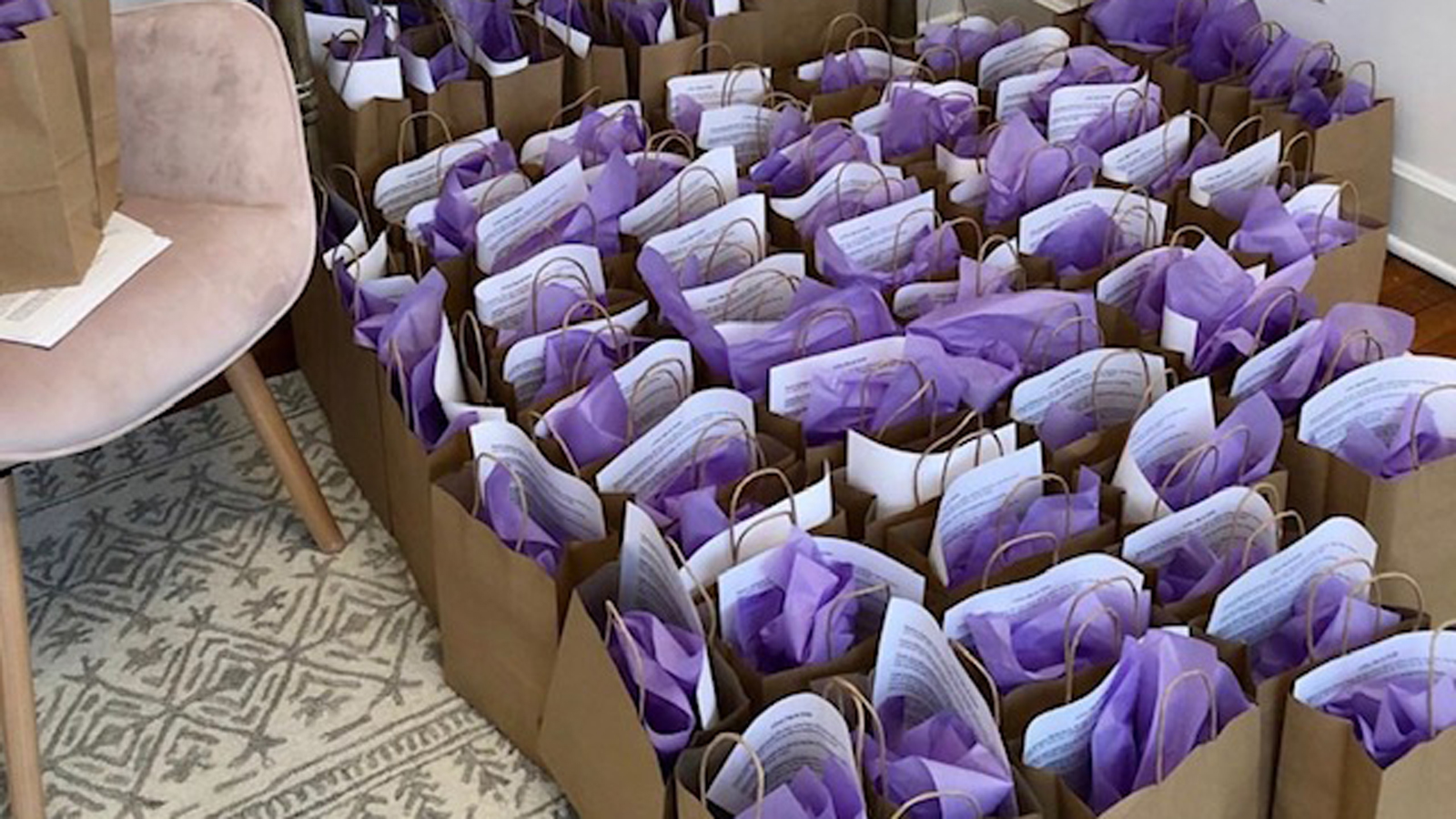 Karen’s thoughtfulness about the participant experience at her eBay dinners reflects her focus on forging personal connections and mirrors her human-centric approach to customer service.

With all these connections and followers asking for advice (“I get close to 200 emails a month asking for how to start an eBay store,” Karen said), what does she tell people? “You can’t wait for things to come to you in life, you’ve got to go out and make something your own, go out and get what’s yours,” she said. “Just thrift a little and sell whatever you’re interested in.”

As to her own future, Karen has clear plans to stay on eBay. “I’m really hoping I can sell for the rest of my work life. Although I’m going to have to sell lighter things, because the stuff I pick up is crazy; I found a couch the other day and put it in my Jeep myself,” she said. “But I’m supporting myself this way. I put a new roof on my house, got a new heating system, renovated my kitchen. And this is all eBay money. My life is crazy, but it’s a lot of fun and I wouldn’t have it any other way.”

Empowering entrepreneurship and creating economic opportunity for all has been our philosophy at eBay since we were founded 25 years ago. Our marketplace has been enriched by its hundreds of thousands of independent small businesses and entrepreneurs worldwide. We win when they do. Learn more about how we partner with our sellers.

The Small Business Owner Who Made Her Dreams a Reality